Towards a Democratic Debate on Chinese Democracy 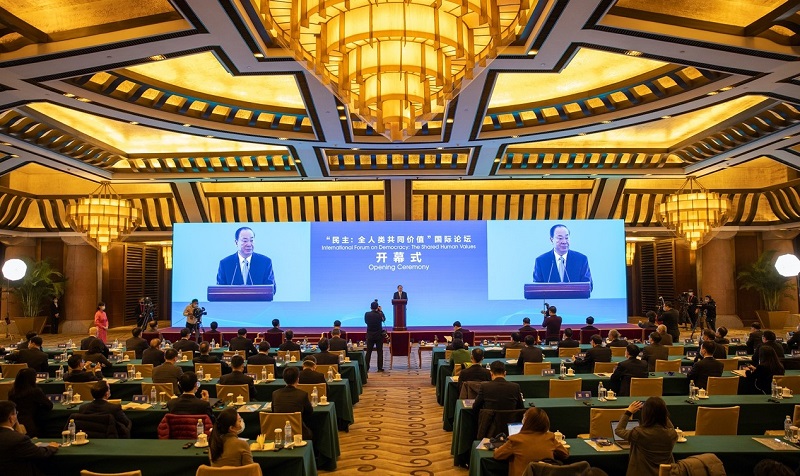 The State Council Information Office of the People’s Republic of China recently published the White Paper entitled “China: Democracy That Works.” This document’s release could not have come at a more opportune time: on the eve of the so-called Summit for Democracy hosted by U.S. President Joe Biden under the argument of preventing democratic setbacks in several countries. China was not invited to this Summit. Interestingly though, China was the only country that has submitted a document on the subject so far.

As China was not invited, it is legitimate to consider this Summit as a U.S. action to create difficulties for Chinese foreign policy. After all, in Donald Trump’s government, the U.S. tried to carry out an economic “decoupling” of bilateral trade with China. At the same time, surprisingly, they practiced an isolationist foreign policy in the U.S. relationship with the world. Biden is running out of time to reverse the negative consequences of Trump’s isolationist policy and believes this involves a campaign in defense of a “decoupling” of the world with China. The underlying reason for this U.S. action has nothing to do with American divergences about the Chinese political system, but rather all to do with the fact that China is the largest trading partner of approximately 130 countries, surpassing the U.S., and accounts for 13 percent of global trade, having surpassed the U.S. in 2013.

Obviously, the U.S. has the right to invite whoever it wants to such a Summit. China, in turn, also has the right to be part of this public debate and defend its socialist democracy that is enshrined in its Constitution. There are two contradictions in that Summit for Democracy that stand out: the first is that the decision on who is or is not a democracy is undemocratic and lacks clear criteria. If there were such criteria, would they be enough to characterize a country as a “democracy”? This is a good topic for a democratic discussion. Unlike China, the second contradiction is that the U.S. refuses to discuss the “democratization of the international system.” It is not enough to claim to be a democratic country if democracy is not practiced internationally.

It is a fact that many democracies are painfully watching the erosion of their legitimacy, especially given the inability to promote economic development with social justice. The high concentration of income and the increase in poverty reinforce the state of crisis in these democracies. It is precisely because many democracies are in a crisis that this debate becomes necessary and needs to be expanded. With the White Paper, China presents its point of view on the criteria for a country to claim to be democratic and demonstrates an openness to debate the issue with other countries who also claim to be democratic.

Starting from the premise set out in the White Paper that “there is no fixed model of democracy” and that “democracy is not a decorative ornament,” China’s socialist democracy defines itself as a combination of electoral democracy and consultative democracy that places an emphasis on the results. In this sense, the exercise of power is oriented towards solving problems that the people want to be resolved, using various forms and channels of consultation to know “what the people want” and “what the government does.” China’s socialist democracy is concerned with making visible and tangible the achievements of the policies adopted by the Communist Party of China (CPC) and the government as a condition for the legitimacy of its political system. Over the past forty years, the Chinese people have experienced a marked improvement in their living conditions. And in the year the CPC celebrated the centennial of its founding, the nation eradicated extreme poverty in its territory. Which democracy in the world is in a position to say what kind of political reform China should promote?

The CPC has developed whole-process people’s democracy as a key concept. Under the White Paper’s terms, democracy cannot be limited to exercising the right to vote by the population. Still, it must also encompass the right to extensive participation by the people. Furthermore, democracy must be evaluated by the number of electoral promises effectively fulfilled by the government and by the practical observance of the rules regulating the political process, frequently subjecting them to public scrutiny.

During the Cold War years of the 20th century, many believed democracy and capitalism were conjoined twins. Today, it is increasingly evident that the capitalist economic model of worker exploitation is one of the main causes of the erosion of democracy. Western democracies do not want to face the problem head-on. Taming unbridled capitalism is what some well-meaning politicians in Western democracies have tried to do so far without success. If this continues, democratic regimes will have to think of new paths.

Whole-process is one of the most important characteristic of Chinese socialist democracy. Different countries have different social systems, and diversity of democratic systems should be cherished, which requires inclusiveness, mutual understanding and seeking common development. The debate on democracy doesn’t end here, that’s for sure, and excluding China from the Summit and the debate is a way of cheering against it.