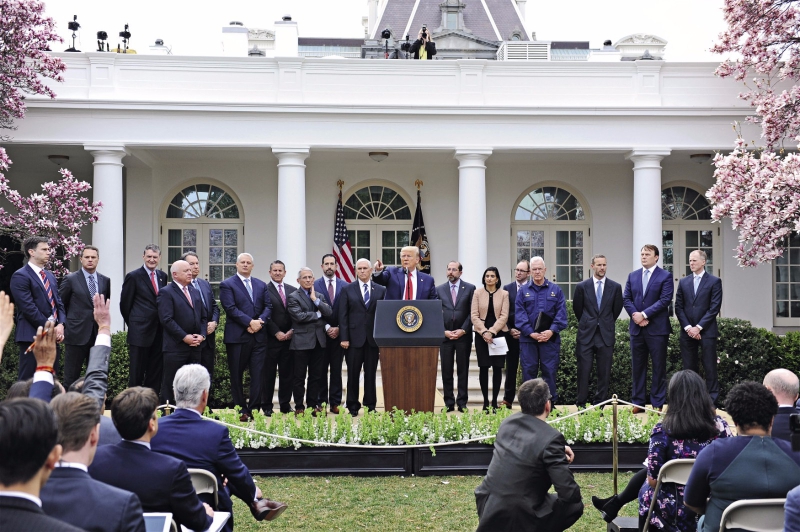 A recent U.S. attack against China, fueled by President Donald Trump’s belligerent rhetoric, uses the law as a weapon. Trump blames China for the novel coronavirus pandemic by calling COVID-19 “Chinese virus.” In doing so, he assumed to be freed from all risks and responsibilities, and encouraged Sinophobia in his country, where the Chinese represent the second-largest immigrant group after the Mexicans. It was expected that the “America First” doctrine would lead to a protectionism foreign policy, even unilateralist policy in some issues. However, such doctrine should not be implemented without considering the minimum standards of good diplomacy and international law. Eventually, the U.S. will push the global system towards an era of “Vale Tudo” (a Portuguese term which refers to an unarmed, full-contact combat sport with relatively few rules), and without the stability derived from respecting the rules, the world will be insecure and could end up in a war.

At this moment, the only global war worth fighting and winning is the one against COVID-19. If the battle was to depend on the U.S., it would take a back seat to Trump’s political interests. His rhetoric against China has become increasingly aggressive as the pandemic harms the American economy, which threatens his re-election plans. He recently declared, without providing any evidence, that the novel coronavirus was created in a laboratory in Wuhan. By making such an accusation and avoiding any serious discussion about the origin of the virus, Trump is politicizing the global health crisis. He is also trying to shift the responsibility of his government’s inefficiency in handling the domestic pandemic, as well as for the increasing number of confirmed cases and deaths, both of which have worsened the economic situation in his country. The U.S., haunted by COVID-19, is not lacking in plans to contain the virus. After all, the country had the National Strategy for Pandemic Influenza, promulgated by President George W. Bush in 2006, and the Playbook for Early Response to High-Consequence Emerging Infectious Disease Threats approved in 2016 during Obama’s administration.

Some American lawyers are endeavoring to provide legal support for Trump’s attacks, aiming to hold China legally responsible for economic losses caused by the pandemic. On March 12, in Florida, a class action was filed against China, Hubei Province, and the city of Wuhan. The plaintiffs are four Florida residents and a training center for baseball players in Boca Raton. In the complaint, the plaintiffs alleged that China “knew COVID-19 was dangerous and capable of causing a pandemic” and that China had “covered it up for their own economic self-interest.” The complaints support Trump’s theory that a biological research lab in Wuhan allowed COVID-19 to escape from its facility. Subsequently, other similar class actions arose in Texas, Nevada, California, and Missouri.

Most likely, these actions will be dismissed due to sovereign immunity. This norm is based on the general principle of international law par in parem non habet imperium (Latin for “equals have not sovereignty over each other”). Because of the principle, no sovereign state can be judged against its will before the judiciary of another state. To judge China by U.S. justice without China’s consent is breaking the principle of sovereign equality in international relations.

The rule of immunity from jurisdiction has a few exceptions. However, in this case, the rule does not serve to hold China accountable. According to the Foreign Sovereign Immunities Act (FSIA) issued in the U.S. in 1976, a foreign state shall not be exempt when firstly, the foreign state practices a commercial activity and this act has a direct effect in the U.S (§ 1605 (a) (2)), and secondly, when there is a territorial tort (§ 1605 (a) (5)). Considering the first exemption, the complaints failed to specify which relevant Chinese commercial activity, and what is the connection of this activity, to the pandemic situation in the U.S. The second exemption refers to damage, such as deaths, personal injury or damage to properties, caused by a foreign state in another state.

So the big question is, is China responsible for the deaths caused by COVID-19 in the U.S.? Is it the first foreigner who brought the virus to the U.S., or is the U.S. government itself because it did not take necessary precautions when the world was already aware of the pandemic outbreak, to be blamed? Finally, even if there is an American judge able to process the case who then condemns China, the decision cannot be executed because of sovereign immunity. Besides, such a decision made by a U.S. magistrate may have a negative effect on China’s image, but it will cause more damage to the bilateral relations of the two countries.

The path chosen by U.S. lawyers to support their clients suing China will not bring them the financial compensation they expect. Besides, these lawsuits are exposing the U.S. to the same legal risk that China is going through. Recently, a legal case against the U.S. was filed in China, seeking compensation for the reputation damage caused by President Donald Trump’s use of the expression “Chinese virus,” which would foster xenophobia and racism against those of Asian descent.

Republican Senator Josh Hawley proposed to change U.S. law when he realized that those lawsuits against China could not be brought to U.S. courts. Two other Republican senators, Marsha Blackburn and Martha McSally, also made the same suggestion to create an exception to China’s sovereign immunity. These proposals targeting China will bring disastrous consequences to foreign relations if they were passed. The legislative initiatives will lead to not only a judicial, but also a legislative war, between countries. In other words, a state law war.

If China was negligent in avoiding the spread of the virus, all the governments in the world are practically in the same boat. Despite the evidence that the virus is lethal, many countries took a long time to take necessary protective measures to contain the pandemic in their countries. Trump was one of them. China has been making considerable efforts to cooperate with more than 100 countries, helping them fight against COVID-19. China’s actions are not motivated by legal obligation, but by morality and solidarity. On the level of international relations, using the law as a weapon of war is not only immoral but, in essence, an illegal act.